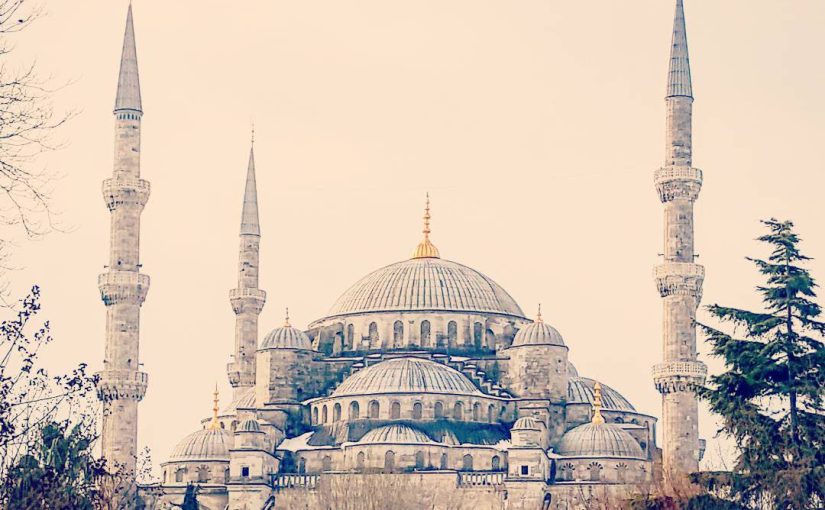 What a gift to spend the holidays with the people you love. Those who warm your heart, more than enough to pull me through the cold Dutch winter. Recommended for anyone who can make it possible to get a trip out of your own life and fall back in the warm nest of love. An excellent opportunity to realize how much you have built up over the years. On a silver tray I was given the millions of reasons to stay and only one to go. So I went, headstrong and face forward. Looking for that what extends life, which empowers every soul, willing or not; adventure.

A known and rich man told me once that a plane ticket is the most beautiful gift you ever can give. Not just to go far and wide. Not because the buildings are so beautiful and different over there. Not because we like swimming in the pool, which is conveniently located next to your hotel room or to discover how many historical pots and pans they have collected at the local museum. I’m always pretty excited about of all this, but the power of your ticket is in the ground. Knowledge and fortify buried around the world and gathered billions of treasure hunters. Growth is always unexpected, somewhere on the line of your comfort zone and real life:

Istanbul is grasped by a snowstorm. Six hours in a stationary flight, seven more hours in line at the airport and another three sleepy hours spent on transportation and breakfast services. When 20,000 people are simultaneously ending up at the airport, things are all over the place. Hopeless with my suitcase in no-one’s land, I stumbled from gate to gate. Got parked in the wrong queue. Nobody could give me any answers. With a visa in my pocket I walked towards the security who by then had widely opened the gates, since the number of people was larger than the airport could offer space. With growing bags under my eyes and tired limbs I stepped into the next row, where people joined the same boat and started conversations. Thus I meet a man whose marriage was about to take place in two days’ time. With his head in the clouds, he still had both feed on the ground and moved by this story I started following him. At one point he had received priority and the guarantee of joining the first flight towards his home country. Unfortunately, I lost sight of him and I’m not aware if he has been able to reassure his fiancee in time. Meanwhile, I teamed up with an Englishman to start the fight for a hotel and a new ticket, when we bombed into a young American girl who was close to desperation and fear dreaded of her face. For a good reason though. Where one gets tired and frustrated by uncertainties, a riot starts with turbulent personalities. Within a few minutes I gained the experience of two fights and this proved to have a quick domino effect. But difficult roads lead to beautiful destinations. For example, the Englishman appeared to have been conducting the musical Les Misérables at West End for years, the American girl now also lives in my room at the Hilton which has soon developed into a true friendship and I have just been drinking coffee with a Lebanese who steers submarines.

After hours of “exploring” the airport unfortunately our bus got stuck in the snow, so the last 15 minutes we had to walk towards the hotel. Elderly, children, men with heavy suitcases. The screen could have been black and white. Within sight the hotel at the top of the hill, we all crawled through the heavy layers of snow. People felled, bags were left behind, women cried, mothers grasping for clothes to cover their children. In a snowstorm every minute is too much. My hands turned blue and my hip started failing because the cold wind was literally freezing my body. I picked up people from what looked like mountains of snow. The crying and misery seemed endless. The panic that can strike within a few minutes causes an unreal scene where people start helping each other without a doubt and all of the sudden they become one. The door to the hotel was accidentally closed and someone with a mental defect seemed willing to jump right trough. Over a hundred of people bouncing on the windows seemed to be the way out of this storm. When access was given, it changed from one for all, all for one to each person for themselves, struggling their way in. Elderly people having respiratory problems, children were given warm blankets and tears dried up.

Ending up in the Hilton, a safe haven, in a country where I did not want to be but what might just not be that horrid. How an incident like this can be so enriching.

A few minutes back my new roommate and I heard a plane and both spontaneously started dancing on the king-size bed. In a couple of days, I squeak my dancing toes in the sand of the beautiful Omani beach, forgotten all about the long queue’s, thinking of the great new people I met.

Traveling through Kenya is so much more than just visiting different destinations, you’re going through a change in the deep and permanent ways of life. From the mountains to the beach, from the desert to the national park. From too much money to count to complete misery in such large amount. From new initiatives at world level to habits from back then. Where terrorism is highly feared, but Hukuna Matata the most famous word on an international level. Kenya leaves you speechless, which gives me new stories to tell.

When you visit the Maasai villages – which are the most traditional tribe in Kenya – the interpreter tells you about their way of living. For example about the fact that many men have an average of five wife’s and thereby taken into consideration that the woman is doing all the work; from taking care of meals and children to building the “houses”. They explain how the men learn to protect their cattle from lions, hyenas and all other wildlife. After a first slaughter you are to be seen as a real man. Interesting theory. Even more interesting is how these men win over the lady’s to become their wife. Of course, this depends on your wealth and what you are willing to pay for the woman in question. You’re allowed to be married as soon as the woman is circumcised, which takes place immediately after the first menstruation. But personally I was even more intrigued by their punishment system. If you accidentally murder a married man, you owe the head of the village 49 cows. For a single man or a married woman, this is 39 cows and for the single ladies nothing more than 29 cows. A small fee. The fact that they are housed on Kenyan land does not mean that you are hold responsible by the law of the country. Culture is still leading and the tribes govern politics, the future, the business world and everybody’s private life. But if you think it’s all underground, you’re wrong. That applies to (too) many subjects in this country. For example, people told me that they were transporting ivory, which political personalities are responsible for importing drugs, about the illegal ways they used to ensure they were able to fulfil their current position. Mothers rent out their babies to beggars, clean drinking water is just known in the cities of the richest tribes and houses are built of clay since 70% of the country’s population still has to live off one dollar a day.

For me, the everyday life is kind of bizarre. I recognize the faces of business relations in newspapers, I meet the entire crème de la crème of this country, yesterday I sailed the sea, tonight I will go on safari and at the time of writing I’m staring at a beautiful lake full of flamingo’s enjoying my African wine. Happiness is easy to define. One finds happiness in small things. A smile, a song, a word. And then you know you’re blessed.

The splendour is indescribable and endless. The creators of Lion King where inspired by Kenya for good reasons and to behold the migration with hundreds of thousands of animals crossing the border between Kenya and Tanzania is something no human will ever forget. Safari’s will never be boring and to run into an elephant over here is just a little bit different from your local zoo. Wherever you are, the rest of the world will slightly disappear from your memory. Sharing this experience brings new friendships and together we jump from one overpopulated pub to another, all trying to get familiar with the horizontal dancing style. The weekends you spend in nature are a yin / yang to daily life in Nairobi, both of which can be a relief. Toilets don’t grow on trees and hanging in a dark wooden cabin with moths starting a boxing contest with your femininity, my crappy apartment in Nairobi suddenly isn’t so bad at all.

A new start is about to come, it won’t take long or I will again find myself in a whole new storybook. Right now half of my mind is still in the Netherlands, I got my sight focused on Kenya but I can’t wait before I can smell the flavours of a completely new destination. Although this country isn’t perfect, in 1963 a little diamond was born. 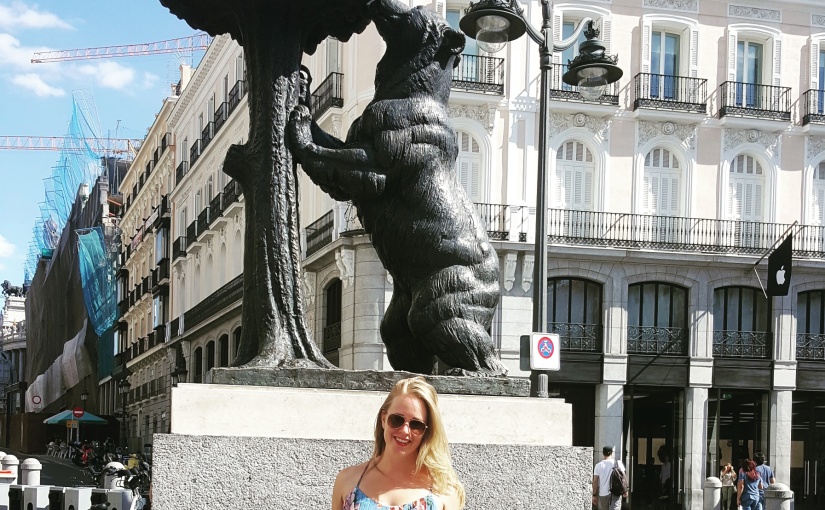 Turn your back to all what you know and what is familiar, to live and not just to be.

Being strong and calm until the final second, when your mom gives you a big hug which says so much more than the word goodbye. That was all I needed to completely collapse, feeling like I just wanted to fall to the ground, grab my mom’s leg and overwhelm the airport with an enduring cry of “MAMAAA “. Of course, as elegant as possible I splashed a single tear from the corner of my eye. And so I went.

The first rung taken and Madrid de las Rozas has been good to me. It was a desolated little village at the boarder of Spain’s capital city, but with 29 degrees Celsius and not to forget about the remarkably well-dressed men, it wasn’t that bad at all. Interesting enough, it seemed that 99% of Spanish people do not speak or want to speak any English. And even though they should be able to understand easily that I am absolutely not able to say more than a jolly “hola” (which doesn’t even sound like that), we continue to chat further, after which I kindly nod and say my goodbye, completed with a ridiculous wave. Every time again. It took a while before I found the way towards the hotel. But later on when I had made it to the office it became a productive visit. My colleagues were very kind and I enjoyed meeting them in person. A fun day you could say.

At the time of writing I’m on my way to Nairobi, counting over 16 hours already. Kenya gazes at me. I gleam back.

Ps: If you could think of any activity for my Kenya-bucketlist, please don´t hesitate sharing via the reaction section below! I will try to follow up on all of them and keep you posted. So let me know.. what will I be doing the coming weekend?